The lead character was handsome, dashing, and consistently well-dressed in tailored suits, which never seemed to wrinkle even after the usual scuffles with the bad guys.
Edwards clearly modelled the character of Peter Gunn on Cary Grant, considered one of Hollywood’s most debonair leading men at the time. The actor chosen to play Gunn, Craig Stevens, even bore a close resemblance to Grant.
The series was set in Los Angeles (although the actual city was never mentioned by name in the series) and, more often than not, inside a jazz club called Mother’s.
The storyline essentially centred around Gunn solving his client’s problems (for which he charged $1000 a case), which always involved having to deal with an assortment of hitmen, hoodlums and assorted “hip” characters found on the jazz scene.
To get a feel for the show that inspired the music, here is Episode 1, Season 2 of the Peter Gunn television series.

Although I've loved this song and video by the Art of Noise, it took about 30 years for me to recognize Rik Mayall as the star of this video. Rik and his friends such as great British comedians Adrian Edmondson, Jennifer Saunders, Dawn French, Alexei Sayle, Peter Richardson and Nigel Planer were seen on television screens in Britain and enjoyed immense success.

During the 1980s the Peter Gunn show was revived for television in 1989. A long-gestating ABC 90-minute pilot, Peter Gunn aired in April 1989 with Peter Strauss in the lead role that was written, produced, and directed by Blake Edwards, but the network failed to order a series despite strong ratings and reviews. Take a look at the promo spot for the TV series, pay attention the very 1980s aesthetic.

The Art Of Noise

A rare appearance of both Duane Eddy and the Art of noise from their 1986 appearance on the British TV show "the Tube". BTW, Duane Eddy is still alive and kicking at age 82.

No collection of Peter Gunn videos would be complete without an entry featuring the Cramps lead guitarist Poison Ivy. She was the foremost female guitarist of the 1980s that left any mark on the alternative music world.

Perhaps my all-time favourite version of the Peter Gunn theme is by the husband and wife duo of Cherry Wainer with Don Storer. This clip is from a German TV show during the mid 1960s. Cherry is so fun to watch. Clearly she loved to be on camera and to perform!

While not taken from the 1977 Montreal concert where their live album was recorded, you still get a sense of their appreciation for the Classic Peter Gunn Theme. Emerson, Lake and Palmer opened their shows with the Peter Gunn theme as means of cheesing up the audience for what was to come during the rest of the concert. 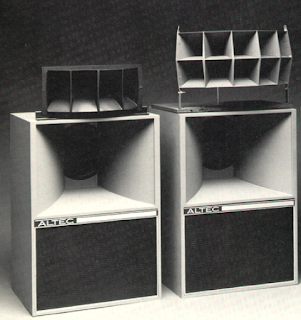 Altec Lansing A-700 and A5 VOTT (Voice of the Theatre) Speakers
The speakers used to create the fabulous echo and reverse on the original Peter Gunn recordings were the classic -industry standard - Altec Lansing A-700 and A5 VOTT (Voice of the Theatre) Speakers. Read on for a look into the company, their speakers and the importance and impact they had on the music and film industries.
Altec Lansing, Inc. is a U.S. audio electronics company founded in 1927. Their primary products are loudspeakers and associated audio electronics for professional, home, automotive and multimedia applications.
Engineers at Western Electric, who later formed Altec Services Company, developed the technology for motion picture sound that was introduced in 1927, with the release of The Jazz Singer. Originally, Altec Services Company serviced the theatre sound systems the company founders had helped develop. In 1941 the Altec Services Company purchased the nearly bankrupt Lansing Manufacturing Company and melded the two names, forming the Altec Lansing Corporation, and with the manufacturing capabilities of the former Lansing Manufacturing Company, they quickly expanded into manufacturing horn loudspeakers.
For a really good look at the design and impact of the Voice of the Theatre Speaker History check out this link. Although the article can get a little technical, the author does a good job of presenting the reasons why the technology became a standard in the audio world.

The Bob Bain story is an extremely long and varied one, detailed in this great article over at "Vintage Guitar" magazine. The Bob Bain Story.
Take the time to glance at the custom The Peter Gunn Guitar over at the Fender guitars page to see a photo of the original and some technical info about the limited edition reproduction guitar. 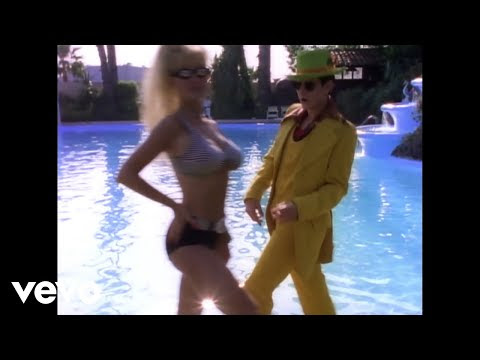 Every Sample from the Beastie Boys "Hey Ladies"